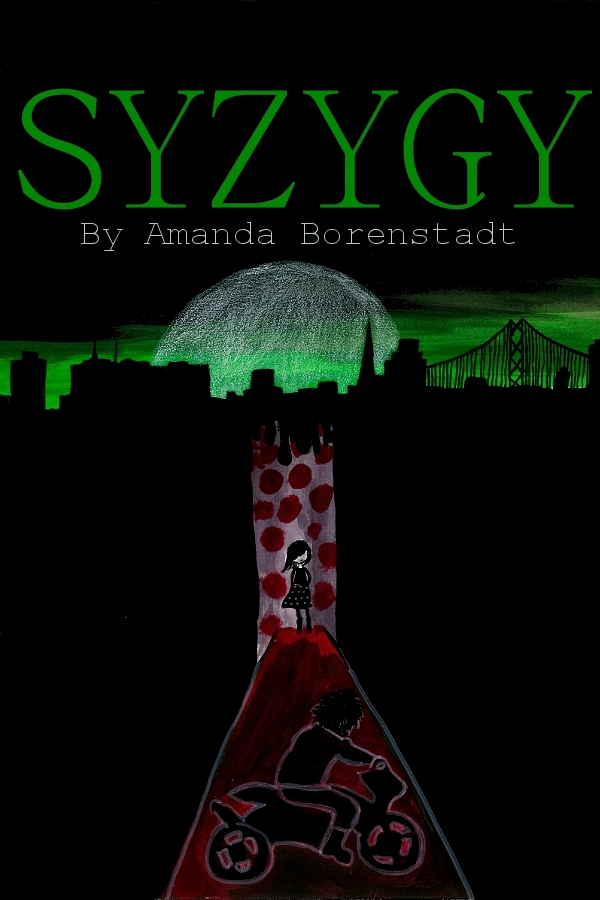 Syzygy (pronounced sizz-uh-gee) the novel by the charming Amanda Borenstadt is published and available for download at Smashwords, or for the Kindle at Amazon. It would probably fall in the category now called, ‘urban fantasy’ but it has strong romance elements too.

From Amanda: It’s the story of Finn Wilde, a super strong mobster who can leap tall buildings as well as hack computer networks, falls in love with Bea Jones, the girl he’s sent to kidnap. She’s immune to the virus that infects Finn’s race, therefore her blood holds the key to the antiserum which can cure him of the bloodthirsty madness that overtakes him for twelve hours each month.

The story is told by a patient at a mental hospital. His narration is sometimes dark and sometimes humorous. Little by little we learn clues about his identity as he grows closer to the widow he befriends in the hospital.

Amanda was kind enough to do a little blog interview for me to tell us a little about her book and her writing in general. She also has created some other fun projects online that go along with the Syzygy novel.

I highly recommend checking out this novel. A mere $1.99 will get you many hours of entertainment that you will not regret one bit. Amanda also has a short story up at Smashwords for free if you’ve never tried an e-book before and want to see how the whole process works first. I’m fairly new to the e-book experience myself, so it was great to download and read these. Now I feel like a pro.

Now, onto the interview!

How long have you been writing? Both in general, and how long did you
work on Syzygy?

Well, I wrote my first story when I was in sixth grade and decided to be a writer. Then, in seventh grade I realized I would never be as good as Ray Bradbury and gave up the dream.

Cut to a giga-billion years later- An artist friend of mine read our kids a book by Peter Reynolds called *Ish* which basically gave the message that things you draw don’t have to look exactly like they really are. It’s tree-ish. Car-ish. Etc. So, I grew the courage to start drawing.

I drew little comics of my teenage daughter going on adventures with Sirius Black and Doctor Who and other little cartoons. My stories got more complicated than I could draw, so I started writing full-blown fan fiction. My husband challenged me to write something I could legitimately publish for money. So, I started searching for my novel. I found it on a BART train on the way to San Francisco in 2007.

I saw this scruffy guy standing by the train door looking all moody and slouchy. I thought, “He sure is trying to look tough.” Then I thought, “What if he really is tough and has good reason to be moody? What if he has a fantastic back-story?” So, Finn was born.

Did you have the story planned out ahead of time, or did it evolve as you wrote?

For sure it evolved as I wrote. The narration completely changed. Ugh! I don’t want to give away any spoilers, but just know that the whole mental hospital part was not in the original plan. And I didn’t even know how it was going to end until I was well into the project.

When I learned the end of the story, I went back and changed how I narrated and added the mental hospital scenes. Then the patient had to go through the whole novel with me and infuse his voice into the narration. It’s there, very subtly at first and grows as time goes on.

I definably saw little bits of your personality in the book, like your fun, quirky sense of humor, but not focused in one character. Do you identify with any one character more? Or does one feel more similar to your own personality?

Thanks. I love quirky! No, I don’t think I identify with any particular character personality-wise. I can identify with Lucas because he’s trying so hard to protect and guide the young people. But our personalities are very different. He’s wiser, has more patience, and is a lot braver than I am. He’s also perhaps the least quirky of the bunch. Some of his phrases came from my husband’s mouth. Like when he answers “Yes,” to Bea’s question, which wasn’t a “yes” or “no” question. My husband can be maddening like that.

Did you intentionally avoid creating a character that shared too much of your personality?

No, I didn’t intentionally avoid creating a character with my personality. What a fascinating question. I guess I felt I was behind the camera while writing rather than in front of it. I incorporated bits of people I know and situations I saw. Even the characters who began loosely based on a person didn’t stay that way. They grew their own uniqueness.

Do you have plans for a sequel, or for any other stories featuring the same characters? (Hint, hint – I think Uncle Lucas has some fun stories to tell.)

Yes, he sure would. And Collin too! I have a vision of a sequel in that I know what happens to every character, but I don’t know if I’ll write it. We’ll see if the world demands a Syzygy Two. Then, maybe a Syzygy III in 3D.

I’ve written a handful of short stories set before the time of the novel. You can see one on my blog. Those characters just won’t leave me be. Hey, if it gets popular maybe people will write Syzygy fan fiction.

Can you tell us about any other writing projects you’re working on now?

Besides the occasional short story, I’m working on a zombie-apocalypse novel, because, as you know, the world is short of those. It’s a romance called, *The Last Guy on Earth Who’s Not a Zombie*. And my niece, Jasmine, and I may collaborate on a graphic novel called *Twelve Keys*, set in a California transformed by mysterious forces that bring modern day, the gold-mining era, and the magical realm together. This is the same niece who created the cover and promotional artwork for Syzygy. We’ll see how it goes. We’ve never published anything like this before. I downloaded the guidelines from Dark Horse Comics, so I figure we’re experts, right?

I’ve heard all kinds of opinions about traditional publishing vs. e-publishing, and it seems like something that will continue to change for awhile. How has the process of publishing an e-book been for you? Now that you’ve gone through it, would you do it the same way if you had it to do over?

No, I would run the other direction and slam headlong into the nearest wall. I’m kidding. Smashwords- well, Mark Coker at Smashwords, made it as painless as possible. I ran into snags because of technical stuff, but really, it’s not very difficult and I’m a technical idiot. There is a lot of waiting involved- waiting for files to upload and be distributed, but I guess that’s the case in regular publishing too.

I’m just grateful that Smashwords and Amazon make it so easy to epublish. Some go a more tech-savvy route and create actual apps for Apple and all of that, but I am happy with the shortcut way.

I love your YouTube channel for Finn. The search especially is so well tied into the Syzygy novel. It may be more fun for those who have already read the book than a promotional tool though. Can you tell us a little about how you came to make these fun videos?

Oh, the Search Stories? Yeah, they are fun. I stumbled on one somebody had done for Ron Weasley preparing for going off to Hogwarts and it was hecka funny. I saw at the end that YouTube had a program where you can simply plug in your search and pick music. It creates the video for you.

My character, Finn, does in fact conduct on-line searches to find Bea, so naturally I had to make a Search Story for him. The one I did for Sam was just a whim. I included some details from the novel as well as some things I knew about him that never made it into the book.

Aside from Sygyzy, where can folks read more of your work?

I have a cute werewolf story at “Lightning Flash Magazine,” a vampire story at “Shadowcast Audio Anthology,” and there’s a freebie urban fantasy on my Smashwords page. For the full list of my stories with links you can go to the sidebar of my blog http://afortnightofmustard.blogspot.com/

Thanks so much for giving us this great interview!

Thank you. This has been so much fun! Interview me any time. 🙂