With a little less than 2 weeks until Christmas, I got it into my head to make some Amigurumi dolls for my kids. By some, I mean 4. I don’t know why I thought this was a good idea, or that I’d be able to do it in the time I had available (which was late at night so they didn’t see me working). But I did. Maybe it was to fight some of the icky feeling I get when I spend too much time in malls and superstores. Maybe it was left over NaNoWriMo, I-can-do-anything feelings, Maybe it was just getting home from the hospital with my kiddo that had her appendix out and feeling all maternal and protective. Making cute things from yarn helps with those types of feeling, you know.

So, anyway, I didn’t finish in time. In fact, I’m still not finished, but the last one is almost done. For my oldest, I made a Pokemon with a poke ball. For the younger kiddo, I wanted a Scooby Doo, but could only find a knitting pattern, so I went with Little Red Riding Hood and wolf instead.

For the Mew Pokemon and poke ball amigurumi, I found both patterns at the WolfDreamer: Off the Hook blog. She has a ton of free Pokemon amigurumi patterns as well as some Mario Brothers ones and other cute characters. She also has a WolfDreamer Zibbet shop.

The wolf I found at the Lion Yarn website. They have some free patterns too, but you have to sign up for a free account to get access to them. Yes, I know he doesn’t look exactly like a wolf. Something went wrong with the ears I think. So far, most people think he’s an aardvark or a mouse. Some see him as a sort of generic quadruped and one could argue convincingly that he is any number of little creatures. Even so, I still think he’s cute, darn it! And I believe when he is standing next to a Little red Riding Hood doll, it will be clear he is a wolf. It’s all about the context. 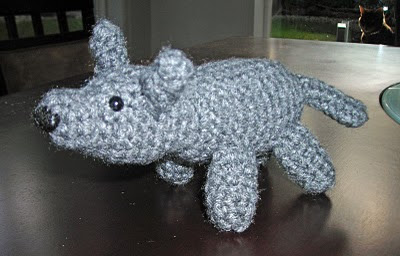 I broke down a bought a pattern for Little Red Riding Hood, since the free ones I found weren’t quite what I was looking for. That’s the one I don’t have finished yet, although she is coming along nicely and I’ll post my finished doll here when I get done. (Which, if my wrist holds out will be very soon.) To see what she will hopefully look like, the pattern is here.

Hope everyone had a great holiday, and is ready for 2011 to get here.

View all posts by Kara Hartz

3 thoughts on “The Twelve Days of Crochet”

This site uses Akismet to reduce spam. Learn how your comment data is processed.