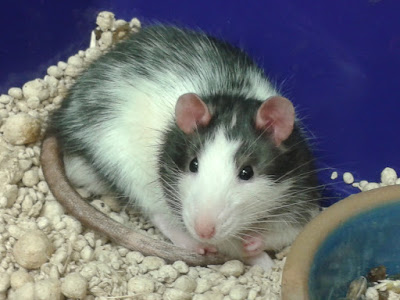 Is this not the most adorable rat you have ever seen?
He is our rat, Zito, who passed away today just a month or two short of his third birthday. He came to us when his owners dumped him off at the sister veterinary hospital to the one I work at. My friends there knew we had a rat, so they called and asked if we wanted this little guy too.
Often, I’ve noticed, rescued pets, or those that you find yourself with unexpectedly turn out to be the best pets ever.  That was true of Zito anyway. I’ve had lots of pet rats over the years. At least ten that I can think of off the top of my head. But Zito was special. He, more than most of the other rats I’ve known, seemed to really love human company. He was snugly. Loved his ears rubbed. He was just plain fun to be with.
Our other rat at the time Zito came to us was named Frito. We thought we would give the new guy a matching name. I suggested Cheeto, but the kids didn’t like that. They argued he wasn’t orange, so it didn’t work. They came up with Zito. Since then he has been the subject of many stories and poems and other school writing assignments. In fact, I just realized today that I have never given a character a pet rat, and that needs to be remedied.
Thank you Michelle for taking such good care of him at the end for us.
He will be greatly missed. Small lives can still  have a big impact on our hearts.

View all posts by Kara Hartz

This site uses Akismet to reduce spam. Learn how your comment data is processed.