I took 6 years of Spanish in Junior High and High School. I remember almost none of it because I never used it. Now I have a little Junior High schooler of my own and we are starting up the language lessons. I still feel that Spanish is a useful second language for Californians despite my own history.
From the recommendation of a friend, we are trying out Duolingo. I’m moving along fairly quickly through the basics levels so far, so maybe all those past lessons haven’t completely vanished from my brain. What I like is: that it’s free, that the kids and I can all have it on our own devices to work at our own level and pace, but I can create a ‘classroom’ to see what they’re doing and how often they are working on it, it’s simple to use and fun enough they are doing lessons without my nagging.
The plan was to just try it out over the summer, but I already like it enough that I’m sure this is what we’ll use for the school year as well.
Duolingo tells me I’m 4% fluent in Spanish so far and offers to post this info to LinkedIn for me. Do you think anyone would find that impressive?

The massacre in Orlando is so awful, I don’t really know how to write about it. Yet, I don’t want to ignore it and babble on about other things today.
To all the hundreds or probably thousands of grieving family and friends of those killed, my heart goes out to you. I wish I could do something to ease your suffering.
Like many others, I’m angry and sad and feeling helpless about how frequently events like this – where someone has decided that they are justified, or even righteous in slaughtering those that they disagree with – happen.
So today, I will do what I can to add love to the world. 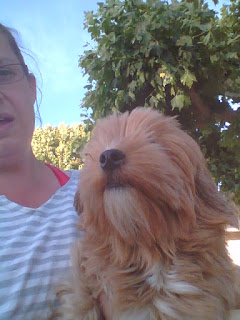 This pretty girl joined me on my jog a couple nights ago. I’d just passed her and a man who was petting her in his front lawn. I shooed her back to him and kept running. As I crossed the street, she was running with me again. I stopped to shoo her more firmly back to her person, but he was gone. I walked back (and she came with me) and found him on his porch. It wasn’t his dog. She had come up to him and he had been looking for a collar and tags when I ran by and she decided it would be fun to come along with me.
So I took her home, stopping to ask other folks who were out walking if they knew her. No one did.
I work as an RVT (Registered Veterinary Technician) by day, so the next morning she came into work with me to check for a microchip. She had one, and I was on the phone with her person a few minutes later arranging how to get her home again. They didn’t want to wait until I came back to our neighborhood after work – they came out to get her.
Microchips work. Dogs are onery sometimes. They run off in a happy friendly frenzy, then find themselves lost. It doesn’t mean they have horrible families. In fact, this doggie’s family was out looking for her last night as I was looking for them. They said they met some of the people I stopped as I was walking home, and were told I was looking for them. We met the same people but never managed to meet each other as we searched for one another.
Thanks to the chip though, she was home less than 24 hours later. Yea!

This is basically a repeat of my previous post “Couch to 5K is My Fitness NaNoWriMo”, except I think this will be attempt 5 now? Maybe? I’ve lost count, but it doesn’t really matter.

In that last post I said I hoped this try would be the one to hit the finish line, but I’m not sure it will be. My colon hasn’t finished being persnickety even though the trouble making part is gone. It’s taking its sweet time to heal, so my ileostomy reversal won’t happen until August at the earliest.  There is nothing particularly tragic about this. It’s only relevant in that I have a second abdominal surgery to look forward to with a second recovery and therefore a second (fifth? sixth?) interruption to my 5k training program.

Still, in the meanwhile, I’m running the program. I ran week 2, day 1 tonight and it went well. Maybe I’ll have time to finish the whole program before surgery, maybe I won’t. It doesn’t matter though. I’ll probably need to restart after recovery anyway. Maybe I’m not a 5k runner. Maybe I’m someone to just tries. A lot.

And connecting these two events for me again – I just learned there is another camp NaNoWriMo in July. I’m outlining right now – something new to me so it’s slow going. I also have some other writing projects I want to move forward right now, but July will be a perfect goal time for getting the novel going. So far I think the outlining process will help me. Some complain that outlining takes the fun and spontaneity out of their writing but that doesn’t seem to be happening to me. Instead it’s making me excited about the story. It has a purpose – a meaning. It isn’t lost and meandering the way it felt. I think I’ve been an outliner trapped in a pantser all this time.

This whole business about the child and the gorilla in Cincinnati is very upsetting. All I see is blame being thrown in all directions. It’s understandable. That’s what we do when we are upset and feel helpless. I have no great insight. What I do have is a deep and long love of gorillas, and I want to share a little with you today.

We read The One and Only Ivan by Katherine Applegate at our homeschool book club awhile ago. The preteens loved it, the littles loved it, and even the moms loved it, and each group enjoyed different layers of this great story based on the life of a real gorilla, Ivan.

When I was in high school, I wanted to be Diane Fossey when I grew up. There are lots of books about her and the gorillas she studied, but here’s a fun one, and it includes sections on Jane Goodal and the chimps, and Biruté Galdikas and the orangutans.

And then we can’t forget about the beautiful Koko. I couldn’t pick just one book to feature for her, so I encourage you to visit her website to see what she has been up to lately. If you’re moved to do something for gorilla-kind in the wake of this tragedy, that site is a good place to donate.

I’m new to the ebook selling game, but I understand that getting reviews can be tough. I’ve heard of many shady practices, buying reviews, sock puppet accounts, etc. that desperate authors have used to try to get around this problem. Maybe I will never be a bestseller, but my ethics are important to me, so I decided early on, that I wouldn’t worry too much about chasing reviews. For my own sanity and peace of mind mainly.

Still, my one nice review on Smashwords from a stranger made me very happy. (Eye of the Beholder is no longer available there, so I won’t link). And just the other day, I logged into Goodreads to mark ‘Revisionary’ by Jim Hines as finished. (A great series – start at the beginning though with ‘Libromancer‘ – you won’t regret it) To my happy surprise, someone had given my ‘Eye of the Beholder’ short story collection five stars.

I know this isn’t world shaking news, but for a little insecure writer who second guesses all her stories, and all her decisions about when to send those stories out into the world, even tiny encouragements mean a lot. Someone out there, not related to me read my work, and found enjoyment in it. It’s huge to me.